“Over five years ago the bank created a strategic plan that focused on the development of non-interest income that would stabilize the bank’s earnings during periods of low interest rates. Today we are seeing the benefits of that strategy as interest rates are again at all-time lows. While low rates are detrimental to our overall net interest income after provision, up only 1% over the same period in 2019, they do enhance the income potential of our Home Lending Department.  The bank’s factoring company, purchased in 2017, is also contributing good, consistent non-interest income, even considering the pandemic shutdown in April and May of this year. The Paycheck Protection Program (PPP) processing fee income also contributed to a very strong first nine months of 2020. Total loan growth, excluding PPP loans, has been very soft through the 3rd quarter of 2020, while deposits are up 37%, some of which can also be attributed to PPP,” stated Ken Trautman, People’s Bank CEO.

“Last year I said that 2019 had been a year of change for the bank, which included a core processing conversion as well as staff reductions in our branch system due to improved technology and processing centralization. The year 2020 has been a year of adaptation as we navigate through the COVID-19 reality, face devastating wildfires and wait for a return to normalcy,” added Trautman.

“The year’s unique circumstances of increased fee income due to the pandemic has enabled the bank and its employees to substantially contribute to the rebuilding of the Rogue Valley community after the tragic fires which displaced nearly 3,000 families,” commented Trautman. “Through a donation to the People’s Bank of Commerce Foundation of more than $1.2 million, the bank and its employees are proud to support the newly formed Southern Oregon Housing Initiative. This collaboration of community businesses and partners is diligently working to develop solutions for intermediate and long-term housing for fire victims.”

The bank’s year-to-date provision for loan and lease losses was $1.2 million compared a provision of $211 thousand during the same period last year. This increase was a hedge against the unknown credit issues that could arise because of the COVID-19 pandemic. In spite of COVID-19, credit quality remains strong with no loans past due over 90 days or on non-accrual at September 30, 2020, consistent with the same time in 2019.  At the end of the third quarter 2020, the loan loss reserve for portfolio loans, excluding PPP loans, was 1.56% compared to 1.12% at the end of the third quarter 2019. 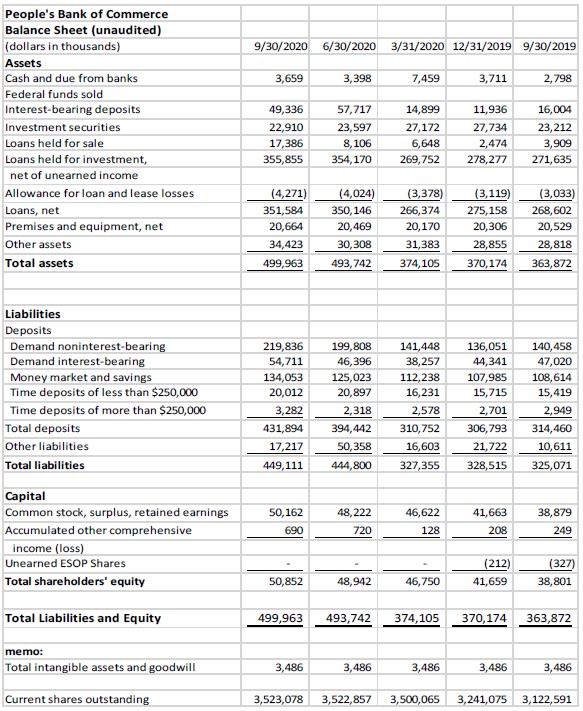 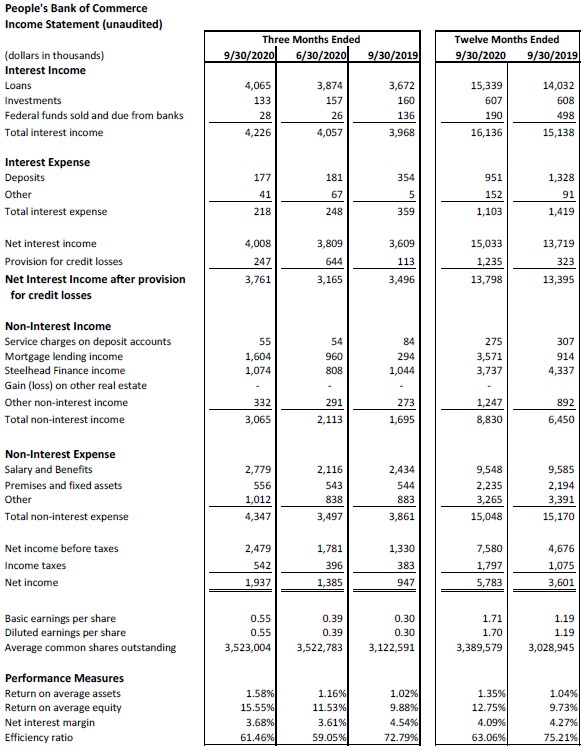