During the quarter, deposits increased $37.7 million, or an annualized 21.2% growth rate.  On an annual basis, deposits grew by $318.8 million, a 73.8% increase from September 30, 2020.  “Of deposit growth achieved in the last 12 months, 43.4% was in non-interest DDA,” commented Joan Reukauf, Chief Operating Officer. The deposit growth was due to several factors, including the bank’s acquisition of WMCB in the first quarter, the bank’s participation in the PPP loan program, and organic growth in all of our deposit markets. “The bank recently completed its system conversion for the Willamette division in September 2021, which is one of the final steps on the merger that took place March 1st of this year,” added Reukauf.

As of September 30th, core portfolio loan growth, excluding PPP, totaled $15.3 million during the 3rd quarter, representing an annualized growth rate of 14.5%.  “The bank’s pipeline of approved credits remains strong, while acknowledging there has been increased pressure on loan rates from competitors,” commented Julia Beattie, President.

The bank’s active role in the Paycheck Protection Program (PPP) beginning in April 2020 resulted in 1,204 PPP loans in Round I, totaling $121.2 million (includes loans funded by WMCB prior to the bank merger with People’s Bank).  At the end of September 2021, 100% of Round I PPP loans had been submitted for forgiveness- only 8 loans remain in the portfolio that are being reviewed for forgiveness, totaling $328,000.  Similarly, the bank funded 629 loans in Round II of the Paycheck Protection Program, representing $48.6 million in loans supporting our local businesses.  Through the end of September, 164 loans funded in Round II remained outstanding, totaling $23.2 million.  “Through our employee’s diligence in assisting our customers in submitting applications for forgiveness, 90.6% of total PPP loans were forgiven by the end of 3rd quarter,” commented Beattie.

During the quarter, the bank experienced a decrease in classified assets.  This was the result of two events- the reduction of Other Real estate Owned, “ORE”, and the charge-off of two loans previously on non-accrual with book values totaling $199,000.  Total loans past due or on non-accrual were flat from the prior quarter.  During the 3rd quarter, the Allowance for Loan and Lease Losses (ALLL) was updated based on new loan growth achieved during the quarter and updated economic expectations, which were factored into the bank’s analysis.  The bank also took a recovery of $76 thousand on a loan previously charged off in 2011.  As of September 30, 2021, the ALLL was 0.94% of portfolio loans excluding PPP and the unallocated reserve stood at $0.8 million or 18.2% of the allowance.

As of September 30, 2021, the bank’s Tier 1 Leverage Ratio was 8.73% versus 9.40% as of the same date in 2020, with total shareholder equity of $77.5 million.  Although the bank has continued to augment capital with earnings, the merger with WMCB and ongoing deposit growth has resulted in the bank’s assets outgrowing capital in the current period.

Third quarter 2021 non-interest income totaled $2.7 million, a decrease of $328 thousand from the 3rd quarter of 2020.  During the quarter, Steelhead Finance factoring revenue increased $711 thousand, a 66.2% increase over the same quarter of 2020.  Conversely, mortgage income decreased $989 thousand, or a 61.7% decrease from the 3rd quarter of 2020.   “Steelhead Finance continued to perform extremely well during the 3rd quarter due to increased trucking activity needed to support consumer demand,” commented Ken Trautman, CEO.  “Mortgage remains a key part of our business strategy, but volume has softened in the 3rd quarter versus the same period last year,” added Trautman.  During the quarter, the bank also updated its bargain purchase gain from the WMCB merger, resulting in a reduction to other non-interest income of $317 thousand, needed to partially offset anticipated tax consequences.

Non-interest expense totaled $5.8 million in the 3rd quarter, down $164 thousand from the 2nd quarter.  Included in non-interest expense is the quarterly accrual of $250,000 for the bank’s $1 million donation to fire relief to assist with intermediate and long-term housing needs as our Southern Oregon community rebuilds.  This is a non-recurring item for 2021.  For the twelve months ending September 30, 2021, excluding one-time merger adjustments, earnings per share would have been $2.43, versus $1.69 for the same period ended September 30, 2020. 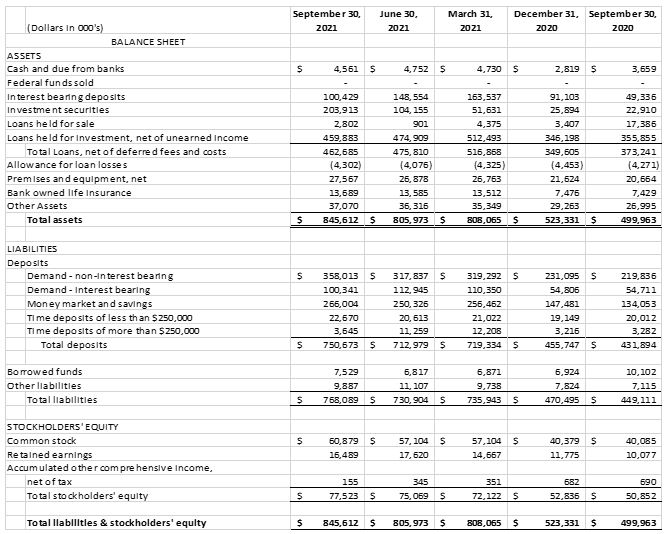 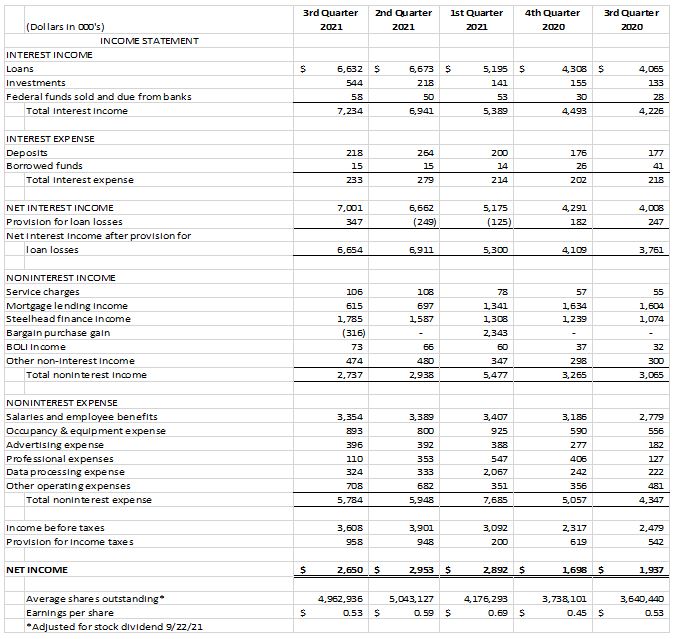 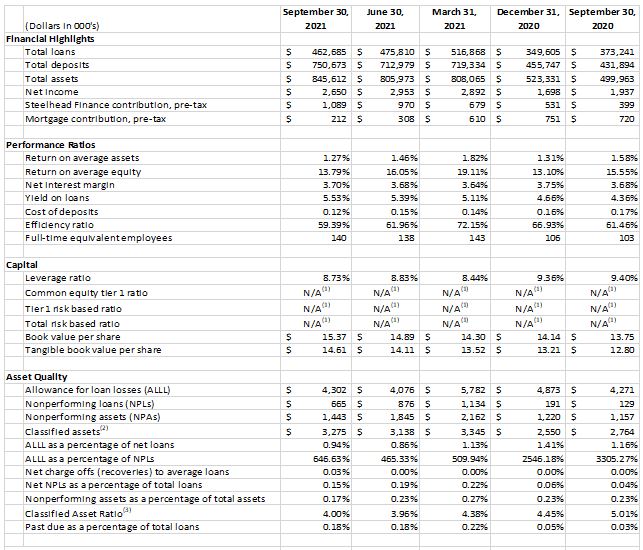