On March 1, 2021, the bank completed the acquisition of Willamette Community Bank (“WMCB”).  As of the acquisition date, WMCB was merged with and into People’s Bank of Commerce.

As a result of the merger agreement, WMCB shareholders received 0.6665 shares of People’s Bank common stock plus $1.70 in cash per share for each share of WMCB common stock.  People’s Bank issued an aggregate 1,238,334 shares of its common stock and paid cash of $3.2 million for total consideration paid of $20.4 million.

Investment securities increased $25.7 million, or 99.4%, during the quarter to $51.6 million as of March 31, 2021 from $25.9 million as of December 31, 2020.  The increase was primarily the result of investments acquired in the WMCB merger, which the bank has retained within its portfolio.

Total shareholders’ equity increased $19.3 million, or 36.5%, during the quarter.  Changes in equity during the three months ended March 31, 2021 were as follows:

The one-time merger expenses in the first quarter of 2021 resulted from the following:

“With the merger of Willamette completed on March 1st, all anticipated merger expenses have been expensed in the first quarter,” commented Ken Trautman, CEO.  “These merger expenses were offset by strong earnings during the quarter, including performance from our factoring company, Steelhead Finance, and from the mortgage division.  Steelhead and mortgage combined reported gross income for the current quarter of $2,649,000 vs. $1,504,000 for the same period in 2020, a 76% increase.”

“The loan pipeline for the combined bank continues to be strong with approved credits pending funding totaling $65.3 million as the March 31, 2021.  PPP loans outstanding as of quarter end were $102 million, with year-to-date PPP loan fee income of $1.5 million.  The balance of the PPP loan fee income expected to be earned in 2021 totals $3.1 million,” commented Trautman.

“The bank worked very hard to respond to the needs within our communities during the Covid pandemic. It was a monumental, unified effort across all departments within the bank to deliver the volume of PPP loans we did and to have had the resulting positive impact on our local economies.  Our staff continues to work very hard in providing new Round 2 PPP loans and in facilitating our clients' receipt of forgiveness,” noted Trautman.  The table below presents the number and dollar amounts of the bank's PPP activity to date by quarter: 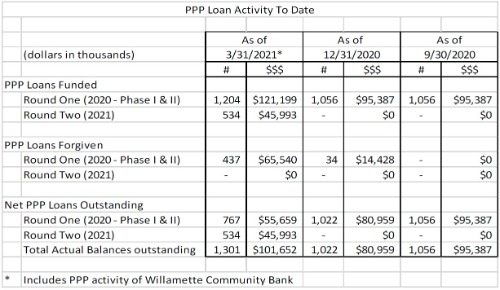 Now that the bank has a better feel for the effect of COVID in our markets, the bank decreased its reserve to outstanding loans, (excluding PPP loans) to 1.01% at the end of the first quarter in 2021.  The Allowance for Loan and Lease losses (ALLL) was reduced 1.45% for People’s Bank portfolio loans and all Willamette Community Bank (WMCB) new loans booked in March of 2021, excluding PPP.  The ALLL for WMCB was eliminated at the completion of the merger and a fair value adjustment was applied to the outstanding portfolio per GAAP purchase accounting guidelines.  The carrying value of the loans acquired in the WMCB merger was $145.5 million and the related fair value discount was $1.2 million or 0.84% of the acquired balance. The unallocated portion of the reserve stands at $964 thousand or 22.3% of the ALLL. 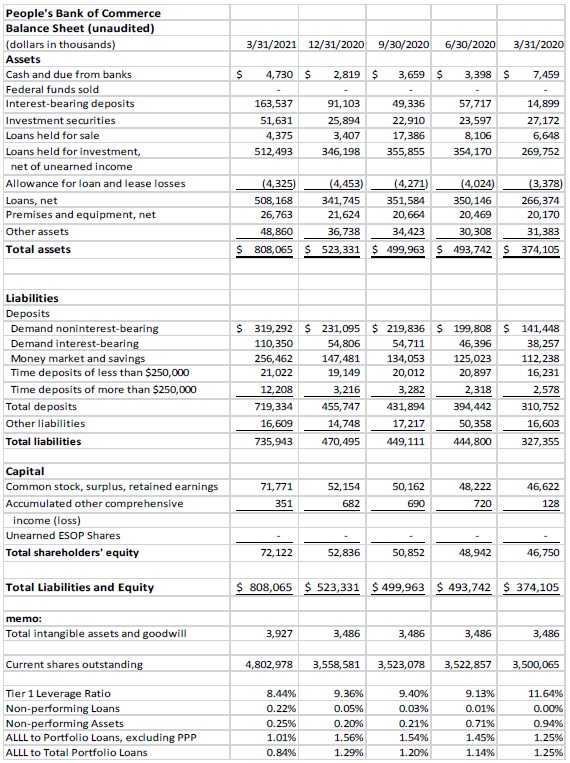 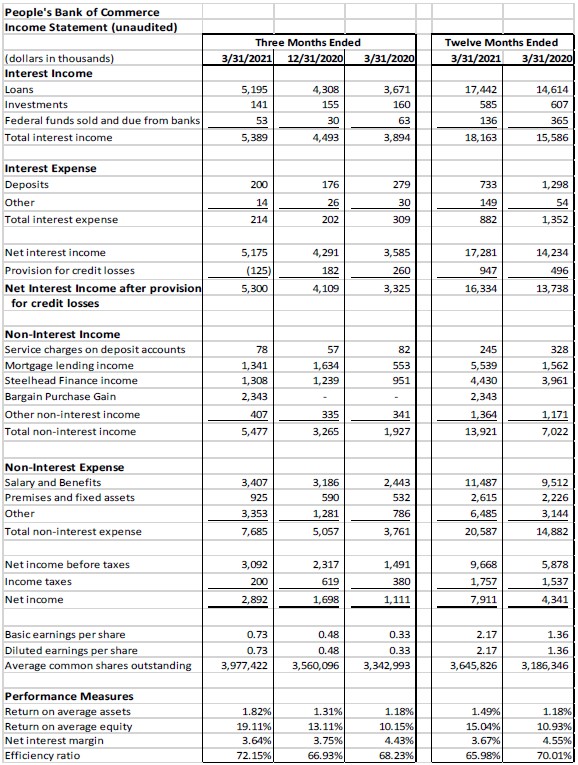