The Company reported quarterly net income of $2.4 million, or $0.47 per diluted share, for the 1st quarter of 2022 compared to net income of $2.9 million, or $0.69 per diluted share, in the same quarter of 2021.  Earnings per share for the trailing 12 months were $2.18 per share, up from $2.07 per share for the prior twelve-month period.  “Although earnings were impacted by the absence of income from PPP, the bank performed according to expectations during 1st quarter.  Steelhead Finance continued to demonstrate strong performance with $2.0 million in revenue during Q1 2022, versus $1.3 million in Q1 2021,” said Lindsey Trautman, Chief Financial Officer.  During the quarter, the bank made a provision for loan losses of $266 thousand.  “The first quarter of 2022 represents the first time in two years that earnings are not materially impacted by PPP loans or merger related adjustments and more closely represent core bank earnings,” commented Ms. Trautman.

Deposits increased $33.9 million, a 4.4% increase from the prior quarter ending December 31, 2021.  On an annual basis, deposits grew by $78.8 million, an annualized 17.7% growth rate.  “Since the merger with Willamette Community Bank March 2021, People’s Bank continued to grow deposits with a strong focus on maintaining relationships with existing clients while increasing market share in our recently acquired markets,” commented Joan Reukauf, Chief Operating Officer.

“Core portfolio loan growth, excluding PPP, was down $1.0 million during the 1st quarter of 2022, compared to Q4 2021, due to several early payoffs, including a previously classified loan and a loan prepaid due to a business sale,” commented Julia Beattie, President.  “We continue to see strong competition for loans in our northern market, with rate being the driving factor,” added Beattie.  PPP loans outstanding at quarter end were $2.6 million, with only four loans remaining.

During the quarter, the bank experienced a decrease in classified assets, the result of a reduction in both Other Real Estate Owned and in classified loans.  Total loans past due or on non-accrual increased, as a percentage of total loans, from the prior quarter to 0.21% versus 0.15% as of Q4 2021.  During 1st quarter, the Allowance for Loan and Lease Losses (ALLL) was updated based on changes in loans and updated economic expectations, which were factored into the bank’s analysis.  As of March 31, 2022, the ALLL was 1.03% of portfolio loans excluding PPP and the unallocated reserve stood at $620 thousand or 13.5% of the allowance.

Non-interest expense totaled $6.0 million in the 1st quarter, down $1.7 million from the same period in 2021.  During Q1 2021, the bank incurred $2.9 million in one-time transaction expenses related to the Willamette merger.  “All anticipated merger expense saves have been realized as of the end of the first quarter, 2022,” commented Ms. Trautman

On March 11, 2022, PBCO Financial Corporation, the holding company for People’s Bank of Commerce, completed a private placement of $25.0 million in aggregate principal amount of fixed-to-floating rate subordinated notes.  The proceeds will be used to support continued organic growth and strategic initiatives.  The majority of the proceeds of the subordinated debt issuance, $22.5 million, was down streamed by PBCO Financial Corporation to People’s Bank of Commerce.  This capital injection qualified as Tier 1 capital at the Bank and helped to increase the Tier 1 Capital Ratio as of March 31, 2022, to 11.25%, up from 8.99% as of December 31, 2021.

As of March 31, 2022, the Tier 1 Capital Ratio for PBCO Financial Corporation was 8.76% with total shareholder equity of $71.3 million.  During the quarter, the company was able to augment capital through earnings while assets also increased with our growth in deposits.  The company also had unrealized losses on its investment portfolio, net of taxes, of $11.9 million, which is attributed to changes in market value in the current rising rate environment.  The net unrealized losses in the investment portfolio resulted in the decline in Book Value Per Share and Tangible Book Value per share from the prior quarter.

PBCO Financial Corporation’s stock trades on the over-the-counter market under the symbol PBCO.  Additional information about the Company is available in the investor section of the Company’s website at: www.peoplesbank.bank. 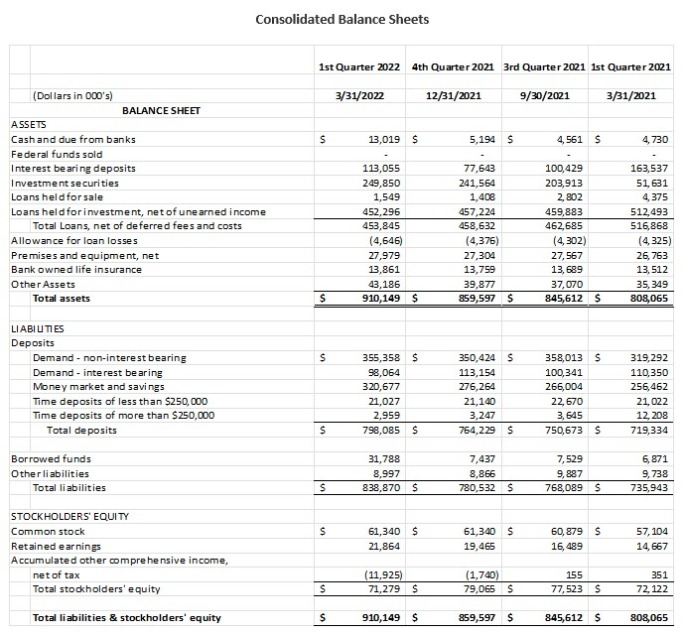 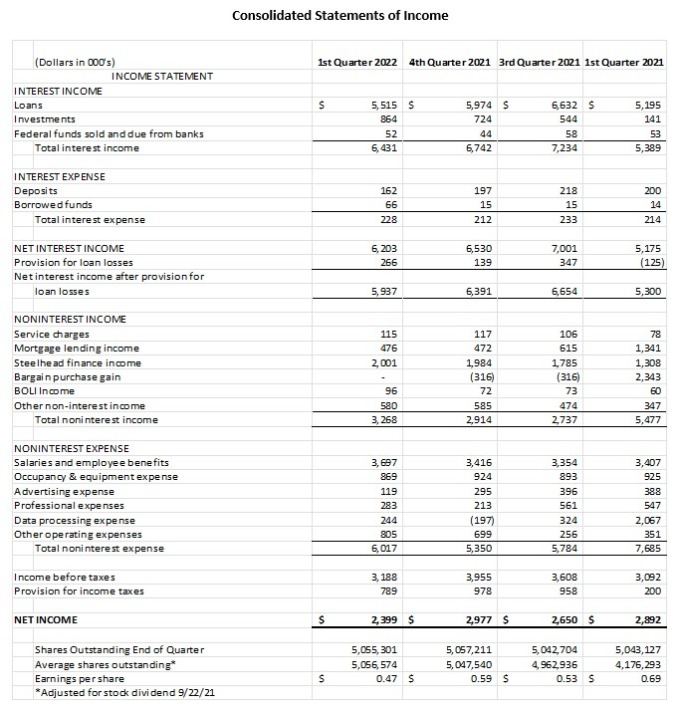 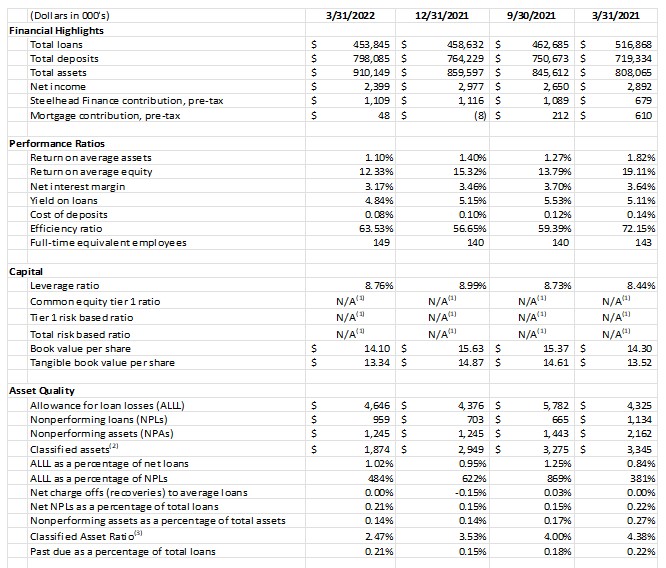